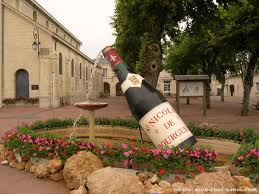 Every January, in common with other towns and villages all over France, the Maire of St Nicolas de Bourgueil and his fellow councillors hold a 'Ceremonie de Voeux' (New Year's wishes) for the village.  The exact format differs from commune to commune, but each includes a word from the Maire reporting on completed projects from the previous year, plans for the current year and ends in wishing everyone in the village health and happiness for themselves and their families.

Our Ceremonie was held last Saturday and about a quarter of the population (350 folk) attended.  After the word from Christel, our Maire, there was the prize giving for the best floral displays in the village in 2012 - 3 of the councillors travel all over the village during the summer and decide the worthy winners in the courtyard, roadside display and wine press categories (well, we are a wine-growing village!).

In St Nicolas, we also watch a film each year.  A club in the village usually films all the year's events (school fete, annual football competition, new mother and baby ceremony on Mother's Day, etc.) and presents the film at the Voeux.  This year though we were treated to the second part of a special three-film series which has documented the memories of the old folks in the village.  As well as being a fascinating insight into the village's history over the past 80 years or so, this is an important record - St Nicolas was occupied during the second world war and much of the written records were destroyed - the number of villagers left who remember those days is sadly declining ( 3 have passed away since making this year's film) and so their memories are precious.

This year's film theme was traditional trades and schooldays of old.  Villagers' filmed memories were interspersed with contemporary photos and documents as well as a couple of filmed demonstrations - one by an old basket-weaver and the other by a couple of real characters who used to be blacksmiths.  Their description of the need to clean a horse's hooves before re-shoeing them taught the audience the saying 'le marechal ferrant touche le merde avant l'argent' (you'll have to look up the translation yourselves!). 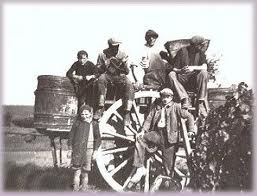 For the schooldays section, the club had taken a group of current village children to a school museum to spend a day in traditional uniform learning about a typical school day and this footage was interspersed with the old folks' memories. This combining of young and old in the film was particularly touching.

As is tradition for almost every civic gathering here, the event ended with the 'pot d'amitie' - on this occasion sparkling wine and a slice of Galette des Rois (twelfth night cake) a puff pastry tart filled with frangipan - whilst villagers mingled to wish each other happy new year, complain about the terrible weather, gossip, chat and generally have a good time. 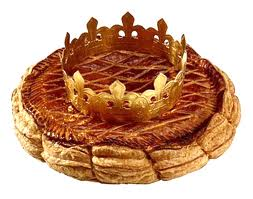 Pedalling back in time

Each June for several years now, Saumur has hosted an annual bike event, where the roads are closed alongside the river and cyclists can truly enjoy the freedom of the road.  In 2011, a new side event was added to this already wonderful festival - Anjou Vélo Vintage. 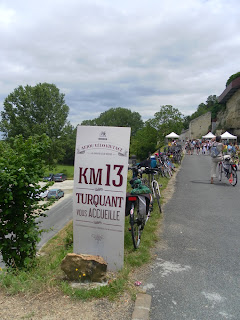 Attracting over 1400 participants last year, this event captures the essence of cycling in its 'glory days' - to take part, riders must have a single speed bike dating from no later than 1987 - luckily (as all our bikes are much newer than that and equipped with lots of gears), these are available to hire - and riders are strongly encouraged to enter into the 'retro' spirit by dressing in vintage clothes from between 1900 and 1970 (I'm sure I probably have some 70's clothes still in my wardrobe!).

This year's event takes place on Sunday 23rd June.  Rides start from just 38km and this route takes you along the Loire and through troglodyte caves and villages.  It passes the chateaux of Saumur and Montsoreau as well as the artists village of Turqant.  For participants, there are refreshment points along the way; highlights are at the renowned red wine makers Chateau de Parnay and the sparkling wine house Bouvet Ladubay.  The circular route ends back in the centre of Saumur at the event 'village' where there will be stands showcasing cycling memorabilia, local products and souvenirs of the event. 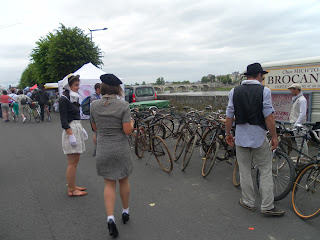 As a family we have enjoyed the general bike ride for the last few years and each time the spectacle of the Vintage riders has been wonderful - couples, groups and families all dressed up and enjoying the fun of riding traffic-free routes with street-side entertainment, refreshments and fun.

So this year, we are taking part in the Vintage ride proper - we will be hiring bikes, dressing up (Max still needs to be persuaded of this part) and starting the ride at 10.30am in Saumur.  Our guests staying with us at that time will be welcome to join us - and we can arrange transport to the start and finish points for anyone who needs it.  If we have enough interest, we may enter a company team, and each member of the team will get a retro cycling jersey with Loire Valley Breaks printed on it!

There is a small entry fee to pay, but this includes a souvenir drinks bottle, official entry pack etc. and there is a cost to hire the required old bike.  Of course, it is also possible to ride the public festival route instead - free of charge - and we have a route ready for guests who choose this option.

There are lots of great official photos of the event here http://www.flickr.com/photos/anjou-velo-vintage/collections/72157630417856242/

We still have some availability for a stay around 23rd June, so if this event appeals to you, let us know as soon as possible and we'll book you in.
Posted by Loire Valley Breaks at 5:44 AM No comments: 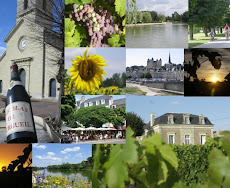